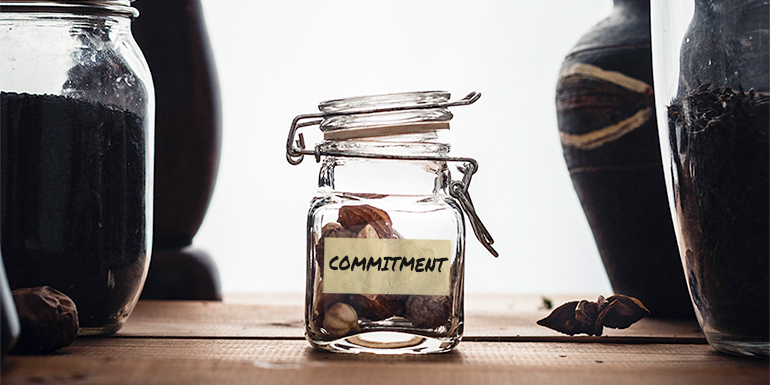 Commitment: The Secret Ingredient of the Successful 4th Sector Entrepreneur

As we engage with 4th Sector Entrepreneurs and consider how we might help them grow their social impact we often find ourselves asking why do some people go from success to success while others never seem to get going?

What’s stood out fromevery interview we’ve had with successful 4th Sector entrepreneurs istheir strong commitment to social justice, which gives them a willingness totake risks that others may have questioned. So many have talked about how theyhave experienced fear, uncertainty and discomfort but been able to work throughit due to their commitment to their overall goal.

We have found that a model developed by Dan Sullivan of Strategic Coach, a highly successful company that helps entrepreneurs grow their businesses, which has spent over forty years coaching entrepreneurs offers a simple but insightful model to explain how this works. He calls this The 4Cs Formula.

The starting point is foran individual to make a commitment to achieve a specific measurable result by aspecific date in the future.

This commitment requiresa level of courage to move forward, as it means someone often has to takeaction before they have the capability to achieve that result.

Why is commitment first?

Becausewithout a strong,specific commitment it’s enormously difficult to get started at all.

Sullivan describescommitment as something that’s created when you make a sale to yourself. Inother words, it requires you selling yourself on doing something that you don’tfeel you have the capability to pull off.

“We often talk about sales in terms of selling to someone else but actually the first sale that you have to make to advance... is to sell yourself on a goal... to intellectually engage... with a future desirable result beyond your capability.”

The commitment stage isall about stating a particular result. When you do this you immediately moveinto the Courage phase – what you need in order to address all the fearsand worries that making this commitment immediately creates.

“Fear defeats more people than any other things in the world”

When faced with the possibility of failure, especially when in a position of responsibility, we all experience fear – but we all have a choice on how to respond.

Courage can be defined asthe willingness to go forward even though you don’t feel confident aboutsuccess and are tempted to procrastinate and stop.

Sullivan talks aboutcourage as a skill rather than an emotion and therefore something that he believesanyone can develop. And while exercising courage is something that doesn’talways feel comfortable, he emphasises that it’s essential if you’re going toincrease your capability in order to achieve a higher level of confidence.Courage creates a rush of adrenaline that puts your brain on high alert, whichin turn sharpens your sense of urgency, simplifying your priorities anddecisions and giving you the energy to move forward.

Crucially, it’s also a key stimulant for creativity because, as Sullivan notes,

“Innovation occurs in the dynamic zone between courage and capability. The moment you take that risk for the sake of something bigger and better your brain becomes creative, innovative and inventive.”

So being courageous –with a clear commitment to a goal – drives the energy to innovate and developnew, more powerful capabilities. At which point it’s inevitable that yourconfidence will jump.

These capabilities cancover a variety of areas – personal, team, funding – but in essence what theymean is that you’re now able to do something today and in the future that youcouldn’t do in the past. That you have confidence in your ability to deliver. Asense of certainty and calmness that you can achieve your goal.

When you feel good aboutthings there is always the temptation to enjoy yourself and relax. It’s sooften seen in the sporting world, where an individual or team wins somethingbig and then loses the commitment to continue to develop. Inevitably, someoneelse comes through to beat them.

The only way to combatthis is to go on to make a bigger commitment that puts your confidence at risk.That’s why Sullivan talks about The 4Cs as a closed loop, whereit’s crucial to keep flexing each muscle – commitment, courage, capability andconfidence – to keep things moving forward.

As Chief Commitment Officer it’s a cycle of growth that you have to live, not delegate.

So how committed are you to what you say you want to achieve?

NUMBER 122! I’m very pleased to say that last week we heard that we have achieved BcorpTM certification and we’re the 122nd company in the UK to become a BcorpTM. It’s been a short but intense period of activity since we started the journey a couple of months ago...

In the first post of this series, I wrote about the reasons for Bubble Chamber applying for Bcorp status. Having made the decision late in 2016 to begin this process, we spent some time completing the online questionnaire, which covers many aspects of governance, employment policy, behaviour towards the community...